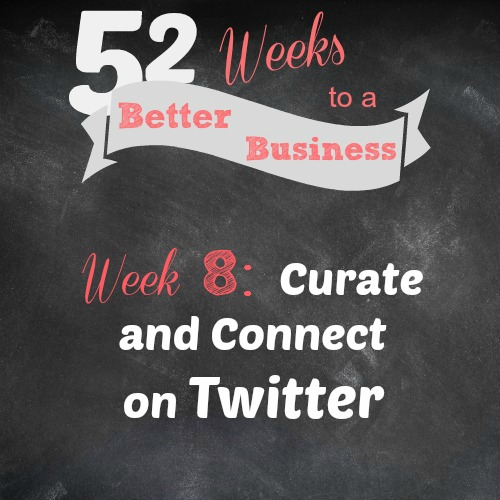 Maybe last week's Facebook challenge wasn't for you.  Maybe, like us, you noticed that although your engagement went way up… most of that engagement went towards other people's pages, while your own site got just a fraction of the love.

If you need a break from the big old FB this week, we've got just the thing for you!  No more moping.  Put down the ice cream, grab your cutest dress, and let's go meet some people!

This week's challenge is all about Twitter.  (And no, we're not about to run you through every form of social media over the next 12 months… we promise!  Hang with us here!)

Extra Credit:  Poke fun at me mercilessly for my cheesy theater voice in the tutorial videos.  Seriously.  Where does that even come from?!

By the end of the week, I'd love for us to have some comparisons.  Where are we really getting the most engagement and clicks back to our site?  Maybe the answer will surprise you!

Twitter IS Twitter. It's full of business dudes and enough blogging articles to make your head spin. Just about every other person who follows me seems to be a business coach of some sort. It often feels overwhelming and leaves me wondering whether Sarah and I have a place in it all.

We're not gurus. We're not coaches or experts. We're just moms who love to learn, take action, and grow. We love picking the brains of other moms who are killing it with their businesses.  Is there a place for us regular ‘gals on Twitter?

After all, I met several of you for the first time on Twitter, and now you're my online friends.  We cheer for each other, answer questions, and just flat out have a great time together.

So, I'm choosing to keep putting my hat in the Twitter Ring.  I'm choosing to look past all the overwhelm and feeling less-than and just walk into the party, find my people, and have a great time.

Here we are at the end of the Twitter Challenge week.

So after following an additional 136 people with similar interests such as Etsy sellers or mom bloggers, we received 22 new followers.  This might seem a bit disappointing, but it's really not too bad.  Considering this is bigger growth than we see on Facebook most weeks with additional fans, I'll gladly take it since it involved just 5 minutes here and there throughout the week .  Also, I'll definitely give the new people I followed a little more time to decide if they want to follow me back.  We could see added growth from this one challenge over the next few weeks.

The next thing we noticed was quite a few more re-tweets than we usually get.  We generally get some re-tweets on our new podcast episodes when they come out, but now that we're using the TwitterFeed Tool to curate the best content on the web as soon as it comes out, some of those Content Creators, like Shane and Jocelyn Sams are taking notice and retweeting us.  It helps us to build a great relationship with those individuals, and again, we're seen as great content curators in our niche.  Several other fabulous people in our TwitterFeed have re-tweeted us when we mentioned them.  It's a win-win!

We're not just getting re-tweets from the content creators, though, we're getting more re-tweets in general simply for providing helpful content from a variety of sources.  For example, Brittany re-tweeted an article we posted from the Etsy blog.  Even though she's not re-tweeting our own content, it still gets more eyes to see us on Twitter and wonder, “Who is BrilliantBizMom?  Should I be following her?”  (Thanks for the re-tweet, Brittany!) 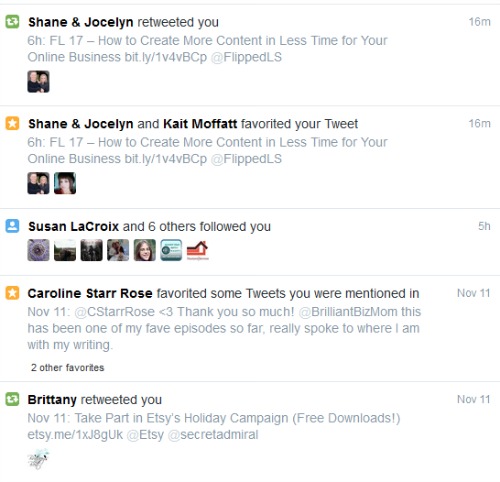 In our own experience, the answer is YES.  Photos can make a big difference on Twitter.  For us, they lead to more hearts, re-tweets, and even replies.

I chalk it up to being a purple cow when it comes to photos on Twitter.  So many people are still not doing it.  They're not taking the time.  Even when we plop in our post photo and it's awkwardly cut off, it performs better than any of our non-photo tweets.

Granted, in this case I used much less compelling copy in the second, non-photo tweet, and I didn't tag Caroline in the non-photo tweet.  But here's the thing:  time and time again, our photo tweets get re-tweeted and favorited more than our non-photo tweets.   Even more importantly, they get more clicks. 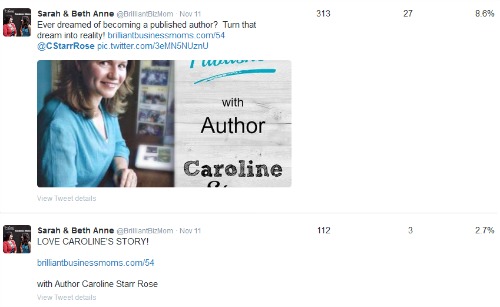 Below is another example of a compelling photo tweet that did really well.  In this case, I think what helped was tagging both of Kat's twitter accounts in the tweet, and the fact that the text on the photo happened to line up really well.

If you can create a photo that looks great on Twitter – awesome!  If you don't have the time (we often decide it's not worth it to make specially formatted photos just for Twitter) then you should still upload your post photo and glean some great results. 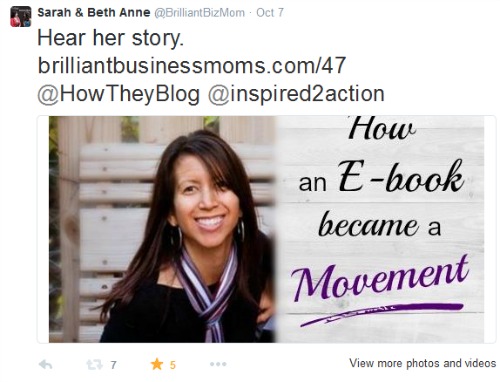 This was a really interesting discovery.  While we routinely see much higher engagement on Facebook and much more traffic to our site via Facebook, realizing that Twitter gets almost as many clicks per impression for a similar post/tweet was pretty encouraging to me.  YES, it takes more followers and more re-tweets to get that same number of impressions.  But still, it made me realize that the platform isn't a lost cause for us.

5.) Twitter is One More Valid Way to Connect with Others

Our blog stats for the last month would indicate that we might want to just throw in the towel when it comes to Twitter.  I mean, we get more referrals to our site from commenting on other blogs, for goodness' sake! 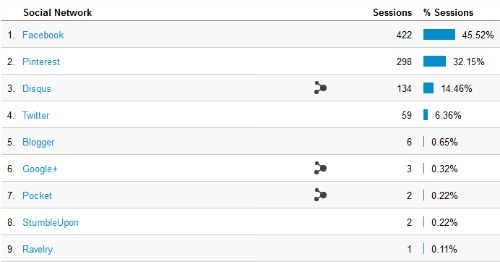 But look at the breakdown for where all of our traffic comes from, and you'll see a different story: 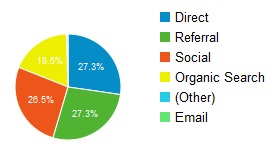 27%  of our visitors come directly to our site – meaning they have a prior relationship with us either through the podcast or through connecting with us in the past.  27% of our visitors also find us through a referral link – meaning somebody else talked about us/recommended us/linked to us.

Relationships are often formed on social media.  We meet new people.  We connect.  We have conversations.  Over time, we become friends with many brilliant business moms, and they like us enough to tell others about us.

Do you see where I'm going with this?

I'm not trying to argue that Twitter is a KEY player for us (Pinterest and Facebook are clearly the winners), but I absolutely do think it's a player.  Twitter deserves to put its helmet and pads on and be out on the field.  It allows us to meet new people and connect with them, and that often leads to more traffic and friends through direct sources or referrals.

What are your thoughts on Twitter?  After using it in a new way last week, did you discover anything new?  Are you ready to throw in the towel or give it another chance?

I can't wait to hear from you!

« 056: Planning, Photography and Business Success with Laura Smith
Week 9: Where Are Your People? »