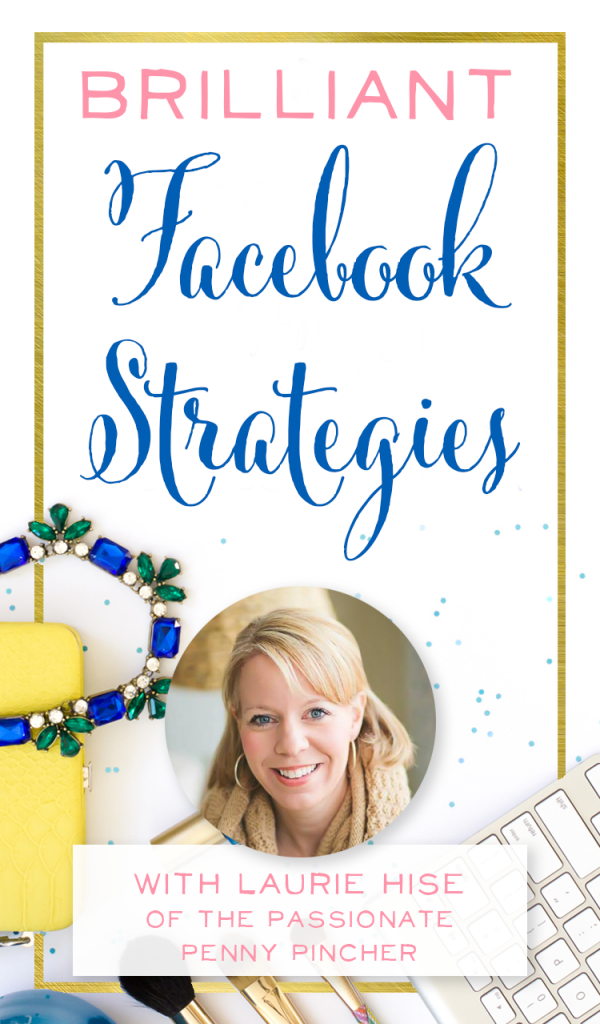 When a stay-at-home mom on a budget launches a blog, her path to success is often different from the fantastical stories we tend to hear about. Success means plugging away – even when results are small and growth is slow. Success means focusing on what really matters – helping your audience and giving generously.

We love the kind of success Laurie Hise represents. It's real. It's genuine. And there are no casualties along this path. If you can relate, listen on. (And even if you plan to “make it” much faster, Laurie has some crazy good Facebook tips you'll want to hear!)

Press Play on the Podcast Player Below to Hear from Laurie

Laurie has been married almost 20 years (!!!) and has three kids, ages 8 to 15. She started her blog, Passionate Penny Pincher, 6 years ago on a whim. When a family illness took much of her husband’s attention, Laurie occupied her time by reading blogs. She noticed a gap in the money saving site niche and decided to start her own blog, then Publix Penny Pincher, to fill the need.

Mom On A Mission

Laurie has always considered herself to be a frugal woman. Around the time when her youngest child turned two, she got an itch to start working again and began dreaming up ways to bring additional income to her family. In the words of Laurie, “I knew that I wanted to earn extra income from home especially as they were getting older and heading off to school…I primarily was a stay-at-home mom. I started obsessively clipping coupons back in 2006 (folks, I was nuts), so the idea of potentially earning an income from home while telling other folks how to save intrigued me.”

She read Crystal Paine’s series  How To Make Money Blogging and followed her advice. As she and her husband dealt with an illness in the family, Laurie used those late-night hours to research and start her blog. From the get-go, Laurie was passionate about donating half of her income to missions. Her husband thought the idea was crazy, but they went for it! After all these years, she still donates half of her blog’s profits to missions.

Of the twelve bloggers who began at the same time Laurie did, Laurie is the only one still working at her keyboard. What’s the trick? Consistency.

Laurie has showed up to work everyday, even though she made nothing on her blog for the first few years.

Laurie’s popular post How I Make A Full Time Income As A Stay At Home Mom + 7 Secrets To Success has encouraged many moms to pursue online (or other creative working outlets) as sources of income for their families. But the post was hard for Laurie to write. When she hears people sharing their crazy success stories, it rubs her the wrong way. Laurie sees herself as just a wife and a mom who got lucky. Even though she’s hesitant to call herself a success, she wants other moms to know that working online is possible.

At the end of the day, Laurie's success is due to a lot of hard work and sacrifice. She didn't start making money overnight, but instead stayed committed and slowly grew her income over many years.

Why Comfort Zones are Bad for Readers

Laurie is a private person, so putting herself out there is uncomfortable. But she knows from her own experience online, that the more a blogger or influencer shares about themselves, the more she begins to know, like, and trust them.

We all feel more of a connection with people who open themselves up more. So for that reason, Laurie has reconciled her discomfort and is willing to be more transparent. When she sees income from ads or affiliate sales, she knows it is because she was able to make her readers feel at home. Helping readers connect with the information she shares is uncomfortable, but sticking with it has been rewarding. (No one ever said business was comfortable or easy!)

Solve a Problem? Build a Business!

Laurie shares some excellent business advice in her article How I Make A Full Time Income As A Stay At Home Mom + 7 Secrets To Success: choose a business model based on people’s needs. In Laurie’s case, she doesn’t blog simply for the sake of blogging. Originally, her blog was Publix Penny Pincher. Her goal was to create meal plans and shopping lists which coordinated with Publix weekly sales. Her site has slightly expanded its focus, but the core of her business model remains the same.

Can Low Expectations be a Good Thing?

Laurie suggests mompreneurs focus on their businesses, not the money, and set low expectations. Her advice is quite different from traditional business advice! Prior to blogging, Laurie had never made more than $7/hour. She didn’t come to the online space with years of marketing and advertising experience. Growing her blog did take a longer amount of time because Laurie was so new to business and marketing, but that meant that any monetary win (no matter how small!) was a big win. Focusing on driving traffic, not building revenue, was Laurie’s method.

Facebook has been the greatest driver of traffic for Laurie. She has three (free!) great ideas for using Facebook.

Does your Business have a Magic Word?

Though her content posts are excellent performers on Facebook, Laurie's page has a few magic words as well. When these words are included in a post, Facebook chooses to show those posts to a large volume of people. For example, Starbucks is a magic word on Laurie's Facebook page. Those deals spread like wildfire! (We understand!)

Because of her niche, Goodwill is another ‘magic word’ that drives a lot of traffic from Facebook to her site. Although recently Laurie noticed that a Goodwill post did very well one day but when she re-posted the next day, she heard crickets. It’s all about the right people seeing your post at the right time. (Isn’t that Facebook algorithm pesky!)

Laurie’s Facebook page shows the work she puts into it. Her recipe roundup posts (like this one) get tons of shares! One of Laurie’s recent Facebook posts, from Money Saving Mom, has 1,415 shares. Impressive!

But Laurie’s schedule is intense. She has chosen not to outsource Facebook posting and commits to posting around the clock (except from about 1:15am – 5:15am) every day.

If we decided to start posting every hour on our Brilliant Business Mom Facebook page (with just 4500 fans) it would be crazytown! As a deal blogger, Laurie is already posting 15-20 deals on her site each day. There’s already a lot of content going around. So she didn’t necessarily need to get her readers used to seeing an intense posting schedule, they already were.

Laurie’s Facebook posting strategy is the most unique we’ve heard! Here are the highlights:

She likes sharing content from other bloggers who are doing well, and has appreciated other bloggers doing the same for her. That altruistic outlook builds a strong community and is a win/win for everyone!

Laurie has a detailed system for figuring out when and how often to repost her own content.

When it comes to sharing content from others, how does Laurie find and curate all of those other posts? It sounds like it would be a time-consuming process! But Laurie has a handy tip that makes Facebook sharing much easier!

Finding the Facebook ‘Save Link’ Tool On A Phone:

On Laurie’s phone, she sees an arrow in the top right hand corner of a link. The options are to: 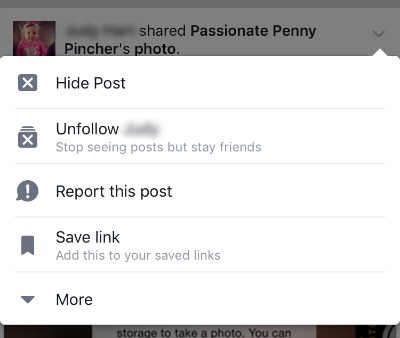 Beth Anne couldn’t quite find the ‘save link’ option, but maybe her phone needs updating 🙂

Finding the Facebook ‘Save Link’ Tool On A Desktop:

When Sarah looked for the same arrow, she visited Facebook as herself (not a Brilliant Business Moms page admin) and saw these options: 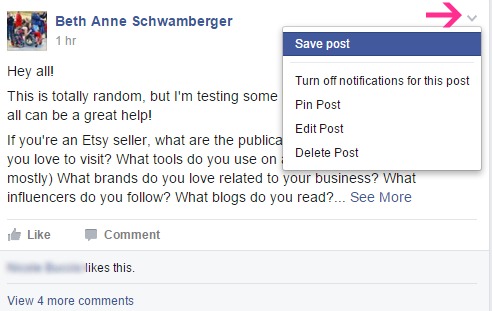 It’s easy to access these saved links for posting later! 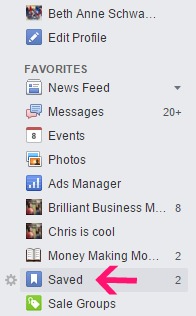 As far as Laurie can tell, your links will be saved as long as you want to access them. We think this tip is a brilliant way to store excellent content shared by you and others. And as smart as Facebook is, we have a hunch you’ll likely start to see similar posts in your news feed.

The Obnoxious Girl Personality (and why online business sometimes requires it!)

The sensationalized aspects of Pinterest marketing don’t come easily to Laurie! The all caps and superlative language feel obnoxious and a bit soul-selling. But, ultimately, Passionate Penny Pincher is a business and Laurie has to make business decisions. For example, her team was spending a lot of time on a  ‘Kroger Coupon Matchup’ series but seeing little results. A quick title change to ‘7 Deals You Need To Get At Kroger Today’ and the series took off!

Laurie asks herself, “Is this (decision) worth giving up  control over to get the traffic?” She admits the balance is a struggle, but she also has a strong center of knowing what is and isn’t worth the time she’s investing away from family to make her blog work.

Despite the great success of Passionate Penny Pincher, Laurie’s family life hasn’t changed a great deal. All of their money, minus the half that goes toward missions, goes to savings. Her kids see that Laurie works hard, but they still live on a frugal budget.

One day, Laurie’s kids were able to see just how much her mom's business makes an impact. Eating at a restaurant, their family came across a reader who thanked Laurie for her blog as they were able to adopt a child thanks to the money they saved. A few days later, Laurie’s daughter came up to her and said, “Mom, you’re helping people. You helped those people get their little girl!” What a sweet way for her daughter to recognize Laurie’s work!

Privacy Policy
We use cookies to ensure that we give you the best experience on our website. If you continue to use this site we will assume that you are happy with it.OkRead more