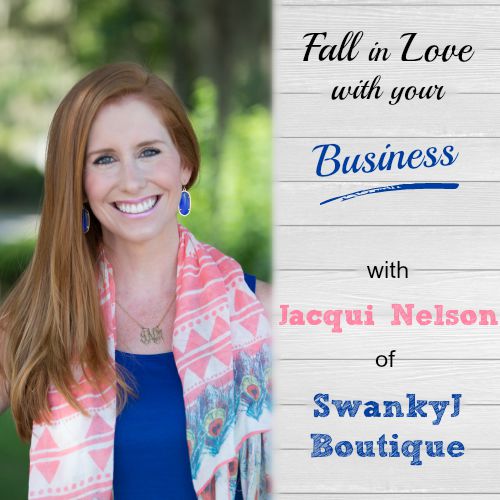 When you make a sale, what happens next? Are you excited and head for the nearest person to give a high-five? (Or maybe a high-paw with the cat will do!) Are you overwhelmed and wonder how you can fit more work into your day? Are you a mixture of the two?

If you've lost that lovin' feelin' when it comes to your business and the sheer joy that happens when you get to make your customer's day, you've got to listen to Jacqui Nelson's story. Every day, she heads out to her warehouse (otherwise known as the garage!) and steams, folds, writes a hand-written note, and wraps her clothing up like a present. Jacqui says fulfilling orders is her favorite part of running her online women's boutique – SwankyJBoutique.com.

You'll fall back in love with it too when you hear Jacqui's passion for her work and her love for making customers happy.

Seriously – her enthusiasm is infectious!

Press Play on the Podcast Player Below

Jacqui says she was born as a natural sales person. Although part of her hates that phrase, because it somehow it brings us back to a used car lot. Jacqui views her sales ability as the knack for finding just the right thing that will make someone happy.

From door-to-door selling as a girl to selling jewelry with a team of women, Jacqui's done it all. She's sold over 1.5 million in real estate and coordinated events too!

When Jacqui had her first child, Skyler, she cut back on her work hours, shifted away from real estate, and chose to work part-time at a local clothing boutique. But Jacqui's passion for marketing couldn't be squelched! She loved working at the boutique and came up with the idea to build a website for them and manage their social media. Unfortunately, the boutique didn't bite.

Jacqui couldn't get this passion for an online business out of her head, so after lying awake one night thinking about it, she turned to her husband Kenny and said, “I think this is it, I'm going to do this!”  That was December of 2014, and by January of 2015 – SwankyJBoutique had been filed as a legal business. In March of 2015, the online store was launched.

Jacqui, believing she could juggle anything, thought she would keep her part-time job while also running her online boutique. She didn't view her business as competition because she was solely online, and the other store was completely brick and mortar. But the boutique wasn't happy with Jacqui's move and they made her choose: her job or her boutique. Jacqui chose SwankyJBoutique! And looking back, she's so glad her former employer made her choose so she could focus on her business full-time.

“I want to create a lifestyle that my daughter will be proud of someday,” Jacqui says.

So… how fast can you launch an online business?

December 2014 – The idea for Swanky J Boutique was born.

January 2015 – Jacqui and Kenny formed an LLC, got their business license, and submitted paperwork for their trademark.

At the end of January, she and Kenny attended Fashion Market in Atlanta to buy inventory for the store. While Jacqui's parents watched baby Skyler, Jacqui and Kenny shopped their hearts out for 3 days!

February 2015 – Jacqui set up photo shoots with models and a professional photographer.

Jacqui says “I felt like I have actually birthed another human with this business!”

How to Free up Cash for Inventory

During Fashion Market in Atlanta, Jacqui's husband Kenny came up with a novel idea for freeing up more cash to get their initial inventory for the store: develop the website themselves!

They had earmarked $5,000 to have a professional develop their website, but instead they did it themselves and used that money for more inventory.

And SwankyJ's first website was great! It looked lovely and had all the features that an excellent online shop would have. (You won't have a chance to see it because their new website is launching any day now!) No excuses for these two – they just made things happen.

Jacqui's husband Kenny (a Marine pilot) has been her biggest supporter in her business.

Despite his demanding career, Kenny has been with her every step of the way. He came to market and helped Jacqui picked out inventory.

He helped her pick a business name and develop the website. Anytime Jacqui has a new idea, she always runs it past Kenny because she knows he'll give her solid advice. “He loves the business as much as I do!” Jacqui says.
We love that! Every great Mamapreneur needs a great guy in her corner! 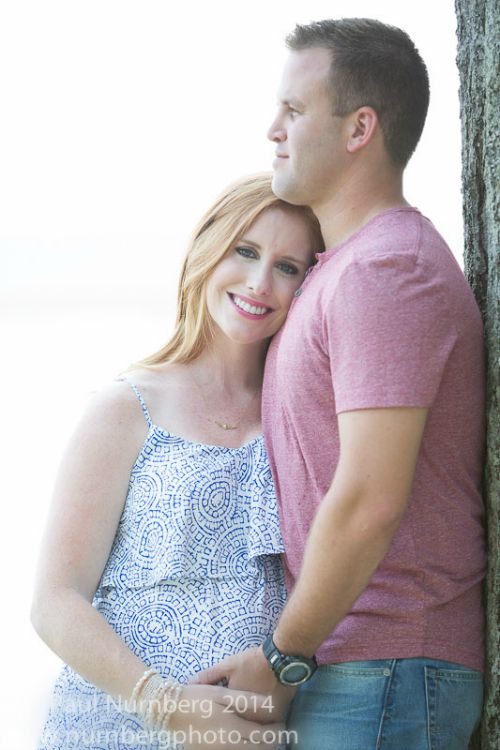 Since we've never been “to market” Jacqui was kind enough to give us the inside scoop on what it's all about!

There are markets all over the U.S. each year – in New York, Las Vegas, Los Angeles, and there's a great one in Atlanta that's within driving distance for Jacqui.  It's called Atlanta's AmericaMart.

It's a humungous building – 11 stories tall – and every square foot of that building is filled with a product that people sell in a store. They have mens wear, children's wear, women's wear, shoes and accessories. There are thousands of vendors who have designed and manufactured these clothing pieces, and they want your business. They want boutique owners like Jacqui to purchase products from them at wholesale prices to sell in their online or brick and mortar shops.

This is the general idea of “markets” although from Jacqui's description, it seems hard to put the chaos of the event into words!

Tips on Going to Market as a Brand New Business Owner

What should you ask? Jacquie found a guide on how to go to market, so she was ready with questions for every vendor she visited.

How much should you buy? At her first market, Jacqui was looking for a large variety of items in smaller quantities. She wanted to start with a large variety so she could test out what her customers wanted before committing to one particular style or piece of clothing. She started by buying just one pack of each clothing piece.

Do you have to go to market to get your inventory? A lot of vendors have great websites where Jacqui can re-order items. She's done this quite often since launching, and she doesn't need to see the clothing in person once she already carries it and knows that it's high-quality.

How to get in “the club”

How does a new boutique owner get approved to go to a market. Clearly, they have to weed out the fashion lovers who are just looking for a deal!

You have to have your business license, retail license, and EIN number to go to market. You're also supposed to have proof of sales.

So how do you get proof of sales as a brand new business owner? Jacqui spoke with a coordinator and learned that she could get a guest pass for her first day, and once she placed her first purchase order, she could come back to the counter and get a legitimate buyer's pass.

The approval process is similar to order from a vendor's website. Jacqui has to email them her business license and retail license, then they approve her for buying powers on their site.

Jacqui told us that it was a difficult decision on whether to use shopify or squarespace to set up their online store. They ultimately decided on Shopify, and they've been so happy with it.

Jacqui says it's an amazing tool for their business. The analytics and detailed reports are so helpful. She checks the reports page every day to see where their sales are coming from, what's selling, and more.

How expensive is Shopify?
Shopify has different tiers depending on how big your shop is, but you will pay a monthly rate to use the service. They have lots of templates for your site, and many are free. Jacqui and Kenny paid $150 to choose a custom design and layout for their site.

While their made-from-scratch site has served them well for several months, Jacqui and Kenny are ready to move on to a completely custom site! They've hired a web design company, and their brand new site should be launching soon!

As much as they love their site and are proud of what they did, Jacqui wants SwankyJ to be the next big online retailer, and the only way to do that is to have an extremely professional site. Jacqui wants a customer to be able to search for a red dress in a size 6 and find it immediately. Her current site doesn't have a database system that powerful. The easier Jacqui can make the shopping experience for her customers, the more her business can grow!

One of Jacqui's favorite things about her site is the fact that a customer can leave a review on any product they buy.

Jacqui knows from experience that when she buys something online, she reads every review that the product has first. You want to make sure that whatever you buy you won't have to send back.

To enable reviews, Jacqui pays a monthly fee for an app called Yotpo. Every customer gets an email 7 days after a purchase, and she offers them a coupon code if they rate and review the products.

Jacqui always writes back and thanks customers for their feedback, because she knows their review will help another customer to make a purchase in the future. Most items on the site are 5 stars!

The people have spoken… and the people like SwankyJ.

Jacqui says that fulfilling orders is her favorite part of the business. She heads out to her swanky, upscale warehouse (the garage!) finds the piece of clothing that's been ordered: steams it, folds it, puts a hand-written note in, wraps it like a gift, seals it, prints shipping label, and takes it to the post office.

Jacqui knows how excited she gets when she makes an online purchase, and she wants each of her customers to feel like they're receiving a present when their order from SwankyJ arrives. Not to mention, since she steams each item, her customers can show off their brand new clothes right away!

Jacqui currently has 13,000 Facebook Fans, and she's only been in business for 5 months! Her growth has been impressive, and she shared four great tips on how she's done it.

Jacqui is willing to spend money on advertising a giveaway for 3 reasons:

Jacqui says she encounters skeptics or want to know if she's paid for her likes. She says, “absolutely not” She pays to advertise on Facebook, but those fans have seen an ad and chosen to interact with her page and like it. They are genuine followers who are interested in her brand, not random people being paid to click like on a page. 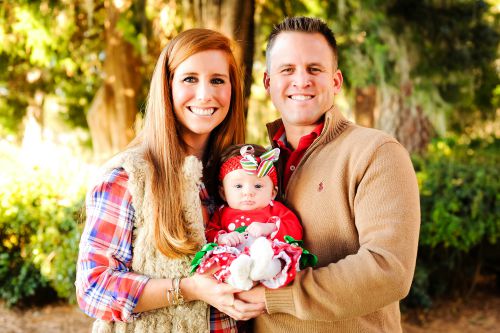 Listen to hear what happened when Jacqui brought her little girl Skyler to work in the “warehouse” one day. It's so cute!

Stay in touch with Jacqui!

Jacqui's new site is launching soon!  She's got an adorable girl boss tee, so feel free to bookmark the site so you can stop back when it launches.